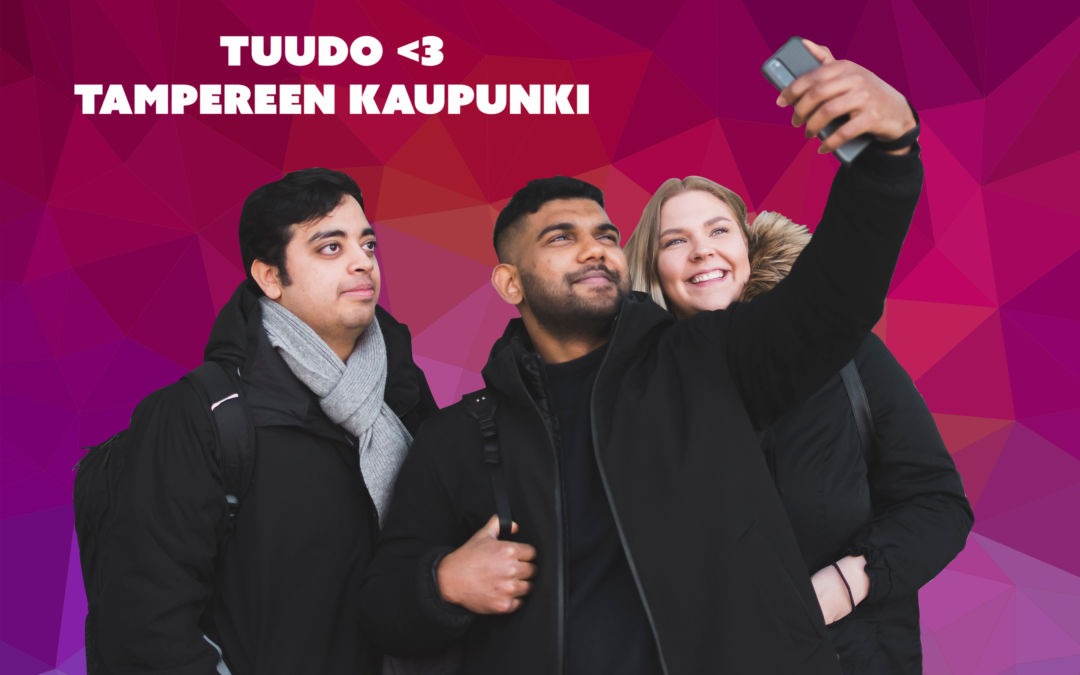 Tuudo started out as a way to make everyday life easier for university students, but in 2021, the Salpaus Education Center adopted Tuudo as the first secondary education institution. The transition from higher education did not happen by itself, but we wanted Tuudo to find out what kind of needs arise at the second level of education and how Tuudo could best respond to them. The benefit for the student is at the center of everything we do, and as we soon found out, secondary education institutions also have similar needs and problems that we were used to solving in higher education.

“On the professional side, the image is often that vocational school students are young, but today there are up to 40% of adult students. The expansion of compulsory schooling has increased the number of young people; In the city of Tampere, vocational education takes care of compulsory education in particular. There are degrees of all kinds,” describes Elisa Helminen, development manager of vocational college Tredu.

Tuudo to help with an identified need

In Tampere, the acquisition of Tuudo was influenced by a genuine need. To identify the right for lunch in the student restaurants, different cards were used with a barcode related to the personal identification number. However, the problem with physical cards was that they were often forgotten home. The information security aspect of plastic cards and the financial difficulty of updating the information also raised concerns.

“We had such a need. Jasmin Junnelin from Tuudo was in touch at this point and suggested an introduction for Tuudo. The most important thing for us was that the student doesn’t have to join anything or pay for a student card, and that proving the right for lunch becomes easier,” Helminen recalls.

“We recognized the problem: either we print cardboard cards for students, or we take some reasonable service to use. We also thought that we would code this service ourselves, in which case we would certainly get the student’s information transferred to the barcode reader. When we got a call from Tuudo, the decision was really easy”, explains Petteri Hänninen, designer and main user of Tuudo.

Tuudo was just the right solution for the identified problem. However, the actual implementation of Tuudo took a year from the first contact, as the tendering process and the procurement decision slowed down the process. On the other hand, a silver lining was also found in the delay; during the year, the additional student safety communication service ended up being included in the service package.

Tuudo in the way you wish

Originally, in higher education institutions, Tuudo almost always included the same basic services that make studying easier, such as personal timetables, study performance information, course registration, restaurant menus, campus maps and much more. In addition to the basic services, the higher education institutions were able to choose the additional services they wanted to use, such as library services or a student ID. When expanding to the second degree, Tuudo adapted to meet the needs identified there; The result was a fully customizable service package, the entire content of which the educational institution can decide for itself.

The most important service for Tampere was the verification of the right to eat, which was carried out with a digital student card. The barcode found on the student card was also put to use in the libraries of educational institutions. Before Tuudo, libraries had separately distributed library cards and student numbers, which were used to successfully borrow material. Now both are easily found in Tuudo.

“With the help of Tuudo, we have also brought the possibility to transfer SecApp messages, i.e. security messages, if necessary for students. This way we can quickly contact the student in an emergency,” explains Hänninen.

“Previously, safety communication worked so that teachers communicated to students through Wilma. There was a slight delay. Now with the help of Tuudo, the message reaches everyone at the same time. Of course, Tuudo also shows Wilma’s news,” Helminen continues.

Students can also find the menus of student restaurants in Tuudo. Campus maps will also be available in the future. Students’ schedule information and educational institutions’ own contact information are also under consideration. “It would be nice to have for example the contact information from Tredu website easily to Tuudo if the student needs to talk with, say, a teacher or a health nurse”, dreams project manager Sanna Kattelus.

According to Helminen, the cooperation with Tuudo has worked smoothly from the beginning. “My experience has been very positive. When we started thinking about cooperation in the first place, the people of Tuudo promised the moon from the sky, or at least it felt that way”, laughs Helminen. “But now, according to practical experience from my point of view, everything has been very smooth in the actual implementation.”

Tuudo’s implementation has taken the most time due to the educational institutions’ own bureaucracy and the working hour limits of those responsible for the Tuudo project. “There may have been a couple of papers to fill out or a table to look over, but problems have always been solved from Tuudo’s side in a really solution-oriented way. We have never ended up wondering if a problem is someone’s fault, but problems have been taken as problems and solved from below”, Hänninen recalls.

Kattelus also recalls the implementation stages from a project manager’s point of view. “The Teams channel was already established and the responsible persons were named immediately. Messages have been responded to very quickly, and an expert has been immediately available to answer questions. We have also quickly received marketing material for different needs, and there has been no need to reinvent the wheel. At no point did it feel like we were being kept in the dark,” Kattelus praises.

So what do the students think about Tuudo?

Mainly the feedback from students has been positive. Tuudo is actively used in secondary schools in Tampere. Occasional problems may have arisen with a full memory on the mobile device, so that there is no room for new application.

“Then it’s a matter of prioritization”, Kattelus states. “With Tuudo, the student gets their lunch. It also works on trains and buses, and you can see other things from there too. My own experience is that the students asked even before the launch whether they could download Tuudo already.”

If you are interested in receiving a Tuudo presentation at your own educational institution, please contact us!